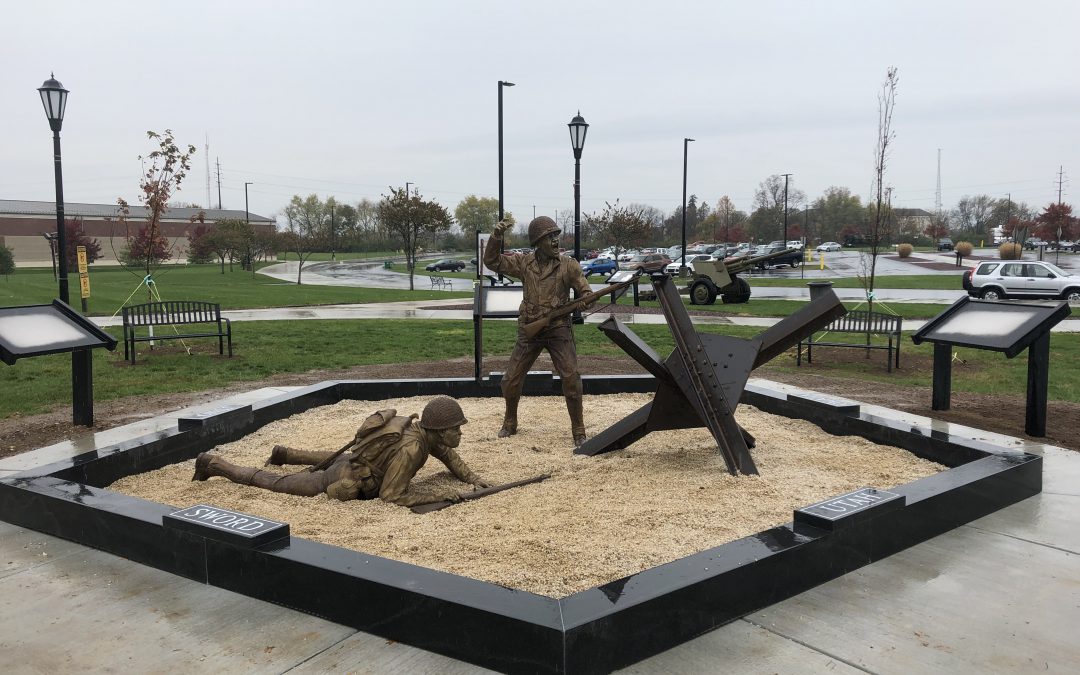 To tell the story of how ART Research became involved in creating these full-scale bronze sculptures honoring the WWII veterans, I have to start a few years ago with another bronze sculpture.

We were blessed to have a local family come to us with a unique proposal, the Adam family. The oldest son, Andrew, was going for his eagle scout badge and was creating a park in Gettysburg, PA that would include a bronze sculpture of a Union Drummer Boy and bronze plaques. We worked with the young man to make this sculpture come to life.

Fast forward to 2018. Younger brother, Chris, came to us for his run at an eagle scout badge. Not to be out done by big brother, Chris had an idea of creating a D-Day Memorial that would include two bronze sculptures around a tank buster, as if they just landed on one of the beaches.

Side Note. To say that these two projects were above and beyond the requirements for an eagle scout badge is an understatement.

Chris’s concept for this project began with the creation of a Lego model. That’s right a Lego model. Most people think that you must have a graphics program to start a project anymore and it simply isn’t true. You need commitment and a penchant to follow thru.

When he pitched his idea to us and the scale he was envisioning the park to be, we were impressed. To help him on this journey ART Research donated the sculpting time to create the clay of the two sculptures. We based the figures off some pictures Chris had of the pose he wanted the figures to be in. The faces were to show the kind of emotion the real men went through on that day.

The silicone rubber mold was produced on the clay figures. Once the molds were complete, we produced wax versions of the sculptures. From there they went thru the rest of the casting process to be cast in silicon bronze. As Veterans day approached the statues were being metal finished and a hot patina was being applied.

The two days before the dedication ceremony for the park and the unveiling of the sculptures it was time to install the sculptures.

It was a cold and rainy day for the install. All of us that were out in it that day had a very real moment of what the men of that day were feeling before they landed. The emotion on the bronze figures and the positioning of the figures around the tank buster set the stage for an emotional veteran’s day dedication ceremony.

More than 200 people were present for the dedication ceremony. Including 29 WWII veterans, a few of which spread sand from each of the D-Day beach heads around the statues. It was a powerful moment for us all.

ART Research is very proud to have been a part in these two aspiring young men’s projects. That both Andrew and Chris thought to bring art into their parks and use it create a place of reflection and maybe start a conversation about it is truly amazing.