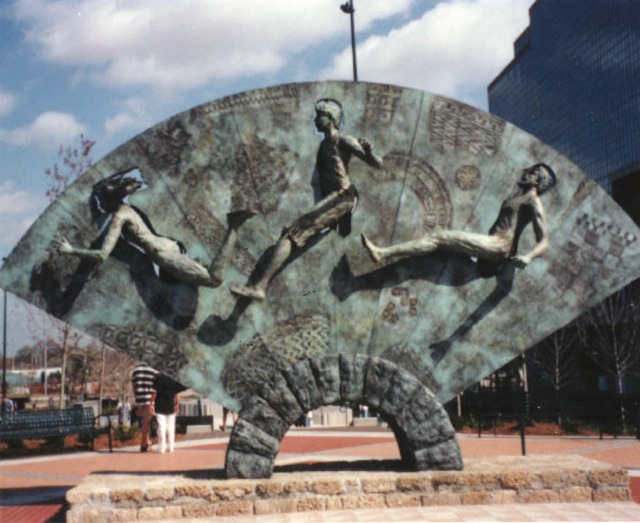 In 1996 “Tribute” by Peter Calaboyias was installed in Centennial Olympic Park in downtown Atlanta to commemorate the 100th anniversary of the modern games. The sculpture’s design consists of large thick bronze plates featuring different textural elements. Within the fan shape are three cast bronze figures in action, seeming to move through the sculpture.

Tragically on July 27, 1996, a pipe bomb exploded in the park leaving 2 dead and hundreds injured. Eye witnesses have claimed that the large fan shape of the heavy bronze sculpture shielded many park visitors from the violent blast.

In 2019 a film directed by Clint Eastwood will feature the story of security guard Richard Jewell who was a security guard at the park in 1996. Jewell was credited to have initially discovered the yet undetonated bomb and helped save many lives by alerting police and started moving visitors away from the area. But three days later, he found himself identified in an article in The Atlanta Journal as the focus of police attention, leading to several searches of his apartment and surveillance by the Federal Bureau of Investigation and by reporters who set upon him. In October 1996, when it became obvious that Mr. Jewell had not been involved in the bombing, the Justice Department formally cleared him.